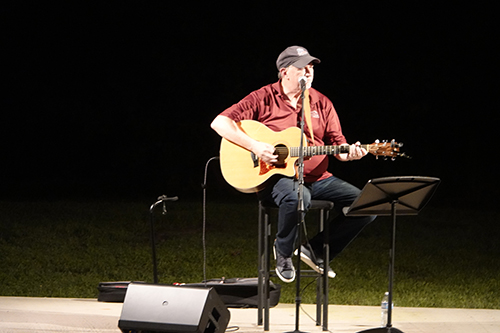 People brought their lawn chairs and blankets to the socially distanced event. From dusk to dark, they enjoyed the show from the multi-talented Whyte who wears many hats. He’s a songwriter, comedian, radio announcer, performer and much more. He also has two comedy song albums, “Off the Wall” and “Leave Em’ Laughin,” to his credit.

His songwriting credits include “Safe Haven” by Hillary Scott & The Scott Family that was included on the album “Love Remains” which won the Grammy for “Best Contemporary Christian Album of 2016; “Crickets," the title song on the Joe Nichols album; “Retired” by Ray Stevens; “Goin’ Ugly Early” by Cledus T. Judd' “Snowed In Christmas” by Linda Davis and many more. He has won a CMA Award for Best Large Market Radio Personality and was given the industry’s highest honor when he was inducted in the Country Radio Broadcasters Hall of Fame in 2012.

There will be more live music in Hot Springs Village during Balboa Beach Family Fun Day and Ice Cream Social on Saturday, Sept. 26, when Shannon Hushaw performs from 11 a.m.-2 p.m. Hushaw is a singer/songwriter with more than 30 years of experience. This performance is sponsored by Big Red Realty as part of the Hot Springs Village 50th Anniversary Celebration.

The final Rock Porch Session at Grove Park will be on Saturday, Oct. 3, when Eastbound and Down with Jackie B. perform.

From the scenic surroundings to the cost of living to the world-class golf and pickleball, there are a LOT of reasons to love Hot Springs Village!

Book a 3-day Discovery Package and experience everything Hot Springs Village has to offer!