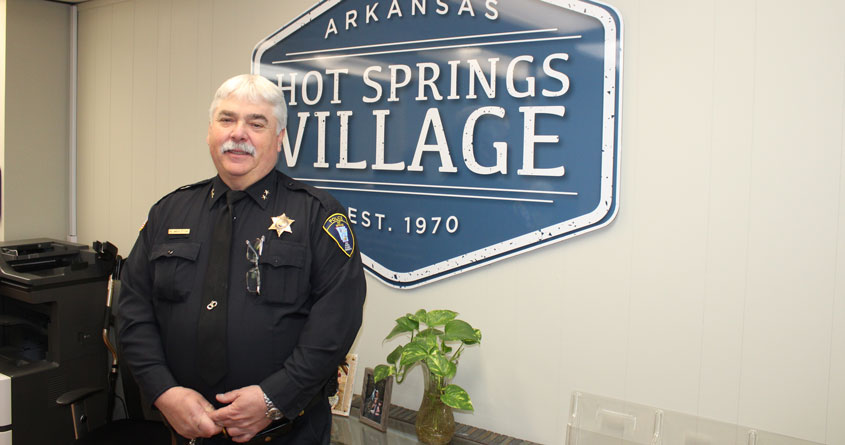 Middleton began working for the POA on Feb. 11, 1980, in the construction department, where he worked for approximately five years, starting at $3.75 per hour.

“In 1980 there were not a lot of job opportunities in the North Garland County area, except for Hot Springs Village,” Middleton said.

In 1985, Middleton was certified as an Emergency Medical Technician and transferred to the HSV Police Department where he worked as an EMT and dispatcher.

In May of 1987, Middleton graduated from the Law Enforcement Academy in Camden, Arkansas, and was deputized by the HSV police department. Later that year he was promoted to Sergeant and Assistant Shift Commander.

“It was a career, not just a job. I have always been public service-oriented, as I volunteered for the Jessieville volunteer fire department as a fire fighter and as Fire Chief,” Middleton said.

Even in those early years, Middleton was seen as a leader in the police department.

“He’s basically the chief when I’m not here,” said then Police Chief Don Wooten in 1993 during an interview with the LaVilla News, saying that Middleton was trusted with making the decisions. In the following year, Middleton would be promoted to Lieutenant.

At that time, the Village had 16 officers, including the chief. Today, Middleton oversees 18 certified police officers.

“The population and the geographical service area has increased since 1987,” Middleton said. “The evolving world of technology and equipment is much different.”

In 2015, Middleton would finally become the police chief for Hot Springs Village, the position he holds today.

“Law enforcement in the Village is a great career,” Middleton said. “You have the opportunity to work with and meet some really great and interesting people.”

The POA congratulates Middleton on his stellar career with us and thank him for his service.

You can still visit even if you are short on time! Schedule a day tour and get a peek at life inside the gates.

Book a 3-day Discovery Package and experience everything Hot Springs Village has to offer!